You’ve asked your child to pick up their toys. Calmly. Clearly. Rationally. Instead of cleaning up, they ignore you.

“Maybe they didn’t hear me?” you think. So, you ask again – firmly but still with a calm, clear tone.

Nothing. You get a little louder – still nothing.

You are frustrated with repeating yourself. And then it happens – BOOM! You blow your fuse.

Out of options and feeling defeated, you’re left screaming the same demands you had requested calmly just minutes ago. Your child looks at you like you have three heads. The energy escalates and everyone is left frustrated and discouraged.

It doesn’t have to be like this. Sure, there will be times that things escalate; but, for the most part, there are easier, calmer, and more effective ways of guiding your child’s behavior.

Children have a hard-wired need for power.

Children of all age, toddler through teens, have a hard-wired need for power and control. This is not a bad thing! This need for power drives young children to develop independence, to learn and challenge themselves, and to become their own person. Children thrive when you give them positive options such as choosing which clothes to wear, climbing into the car themselves, or picking what game to play. If you don’t offer these positive choices, they will exert their power negatively. 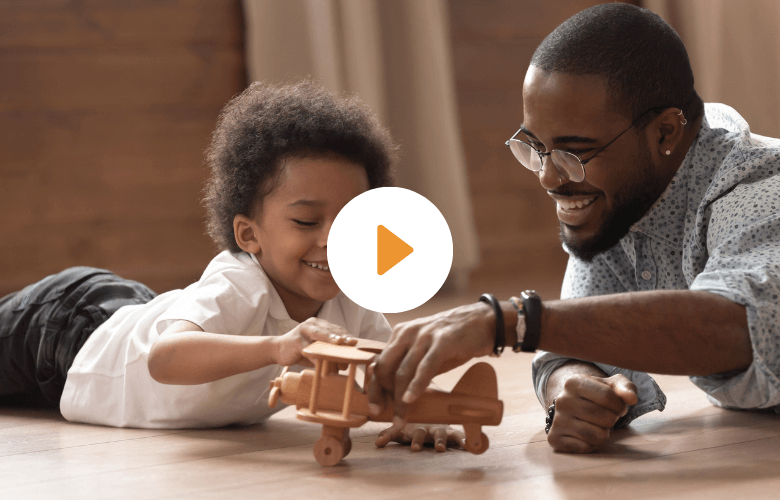 This workshop provides valuable tips and tools for parents to strengthen their parenting skills in a strategic direction. The goal is to bridge gaps (if any) and affirm family unity in each household. Our featured speaker for this workshop is Tamesha Allen, inspirational speaker, co-author, youth and young adult advocate, educator, scholarship strategist, and seminar leader.

Use this resource from Zero to Three as a visual reminder of the behaviors associated with positive parenting.
Read More 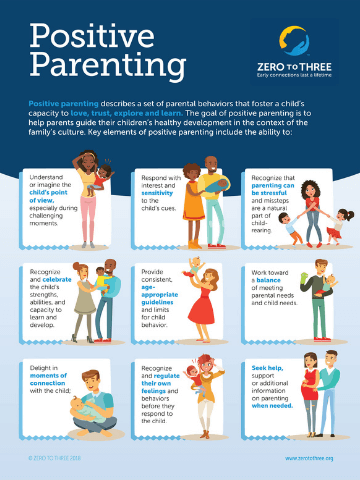 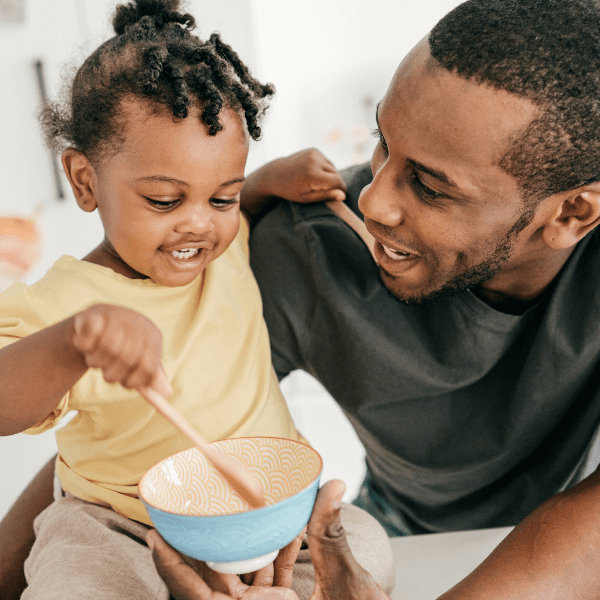 Young children learn best within the context of relationships. They rely on their caregivers to meet their basic needs, model love and support, and guide their behaviors. 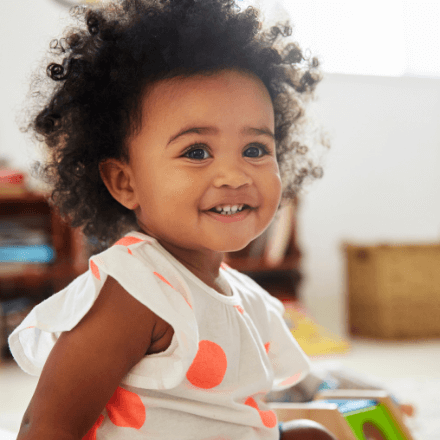 A Tidbit about Toddlers 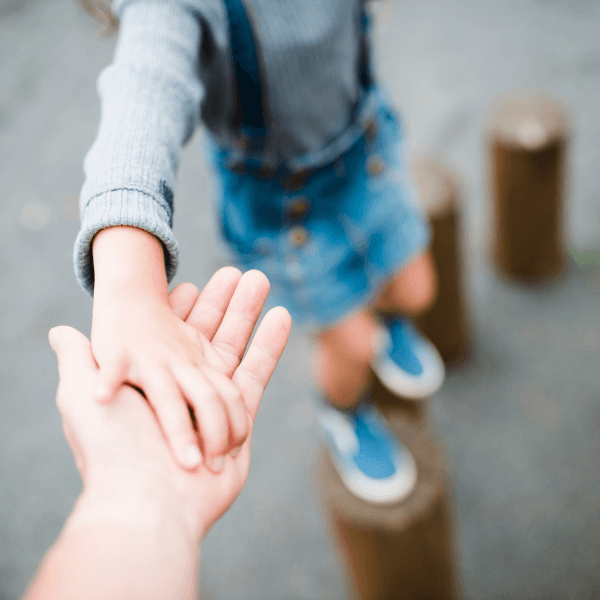 Preschoolers are learning how to be friends, engage in the world, and control their bodies and emotions. With a little guidance from their caregivers, these years will build foundational social-emotional skills for your child. 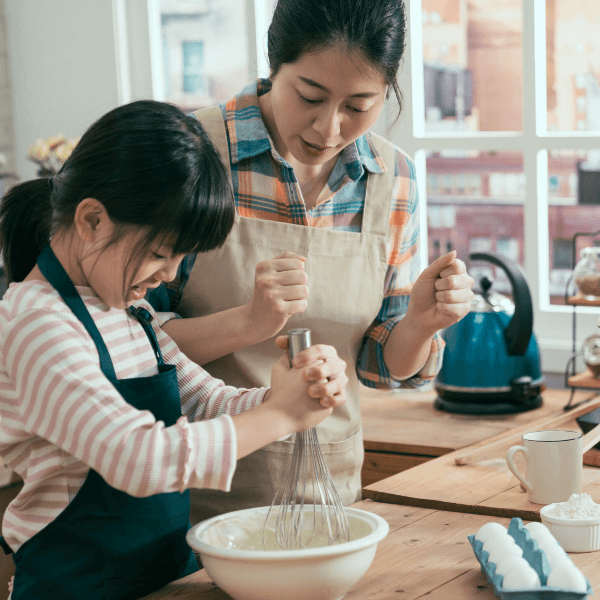 During this stage of development, friendships become more and more important. Children quickly develop physical, social, and mental skills; this is a critical time for children to develop confidence.

Guide your child's behavior through these positive parenting strategies.

Think about the situations that are most likely to lead to defiant behaviors and come up with “workarounds.” For example, if you frequently battle over getting dressed in the morning, offer two outfits that work for you and allow your child to choose their favorite.

Instead of “No, we can’t go to the park,” try “The park sounds awesome! Should we go Friday after school or Saturday morning?”

While there will still be situations that require a hard “no,” by offering “yes” more often you’ll increase the chances your child will tune you back in.

The National Association for the Education of Young Children (NAEYC) has a great resource on creating “yes” environments. While this resource is targeted to child care programs, there are some great take-aways and strategies to implement at home!

The easiest way to avoid an unnecessary battle is to take a few seconds to ask yourself: “Is this a limit I really need to set?” Some things are just not worth the fight. If it does not hurt someone or something, it might be a behavior you can ignore.

Managing your own emotions

Did you know that the brain is a social organ? Our brains develop and even change, making new connections as we interact with others and have experiences in our environments.

For young children, this means their interactions with their caregivers are critical. We can support our child’s brain development and ability to calm their emotions through co-regulation – the process of a child adjusting their feelings and actions to match the positive emotions of their caregiver.

This means we must try our best to stay calm, positive, and regulated for our children. Here are some tips for managing our emotions in the heat of the moment:

As you see those behaviors in action, you can then deliver an immediate consequence – positive or negative. 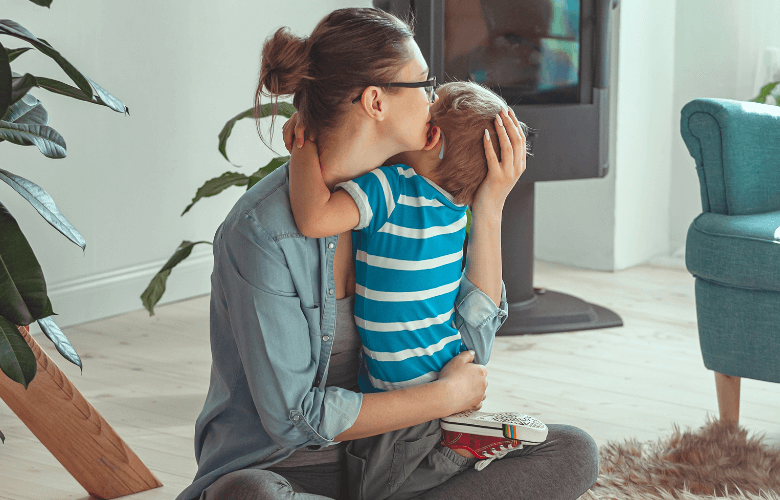 Guiding and Responding to Behaviors

All behaviors have a meaning. While it may seem random, our children are trying to communicate with us. We can encourage positive behaviors by focusing on feelings and problem-solving rather than reprimanding and “teaching a lesson”. Join us as we outline positive ways to provide guidance and consequences and learn how to create routines. 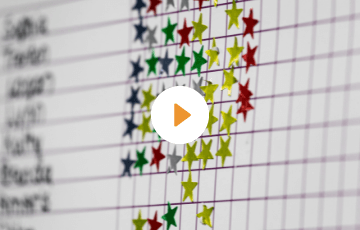 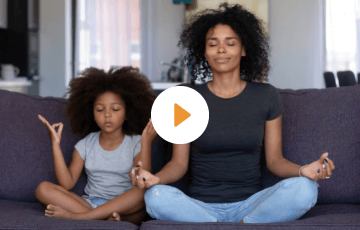 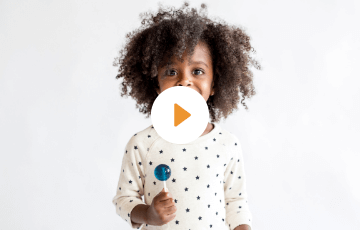 Setting up the environment

Children thrive on consistency. Routines help children learn what’s expected of them and anticipate what is happening next.
Creating Routines

Children lack control within their daily lives. Their schedule is directed for them and much of the day is planned out and controlled by the adults in their lives. Power struggles emerge when children seek to assert their independence and control. Because children do have control over their body and language, the most common power struggles occur when children refuse or ignore our requests. However, by implementing a few easy-to-learn positive parenting techniques, you can give your child power within your boundaries – or “choices within a set of limits.”

Do Away With Don’t

When you need your child’s attention, make sure you get their attention–that means eye contact. When you lower yourself down and look them in the eye, you know your child sees and hears you – strengthening communication and your bond with your child.

A simple way to ensure your child has heard you and that they understand is to ask them to repeat back what you said.

These science-based practical tips and resources can help you communicate better with your children, build closer relationships, and help them develop a healthy self-worth. 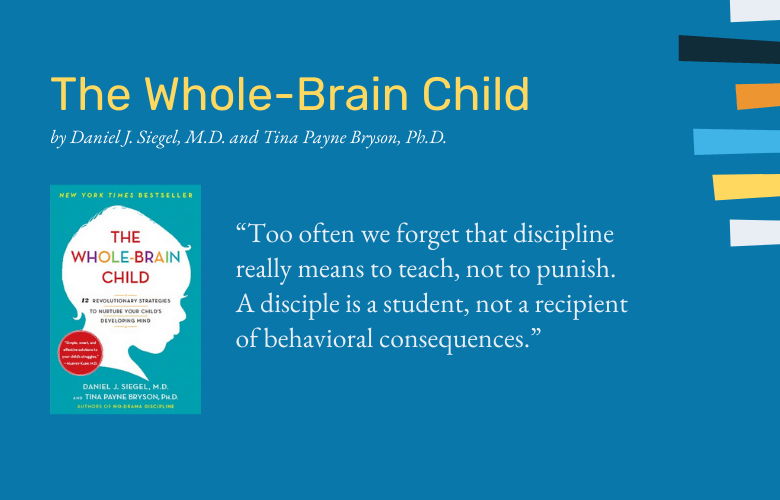 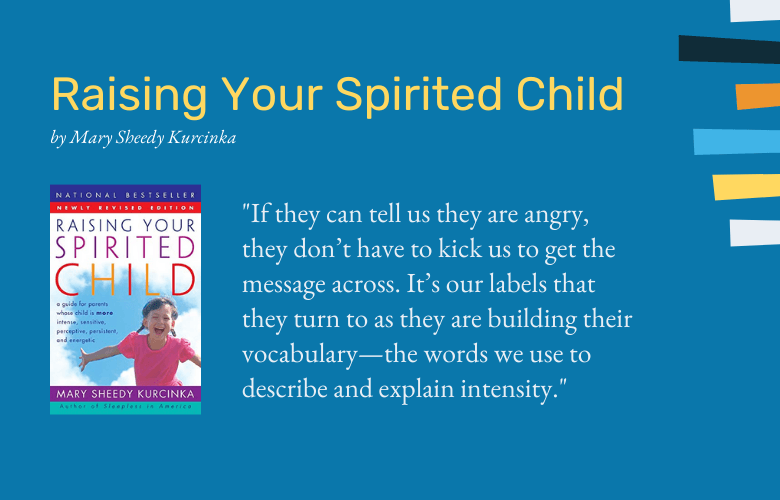 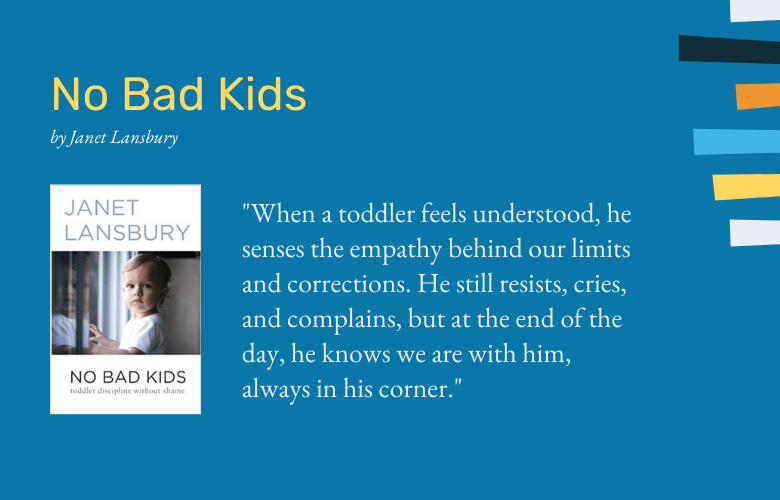 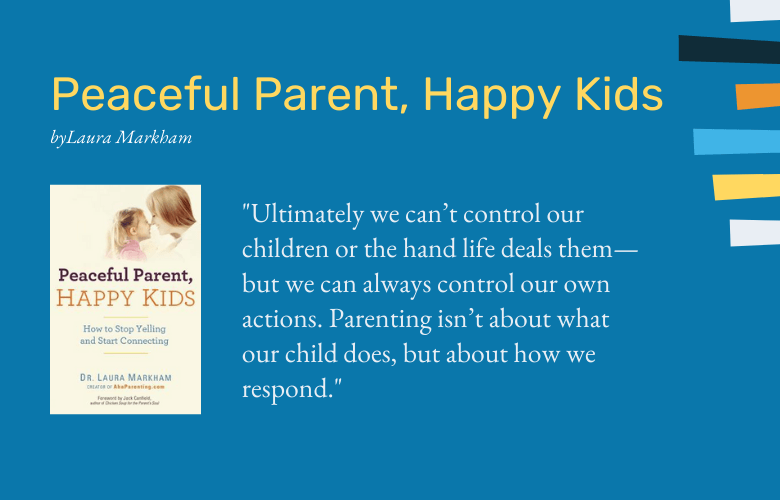 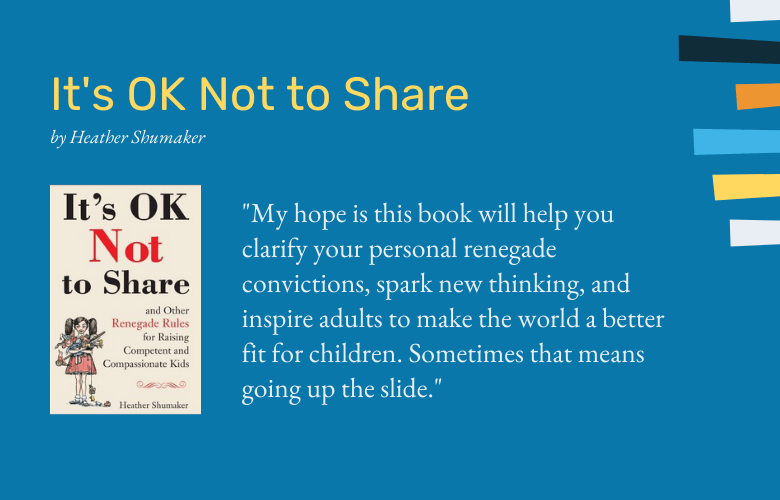 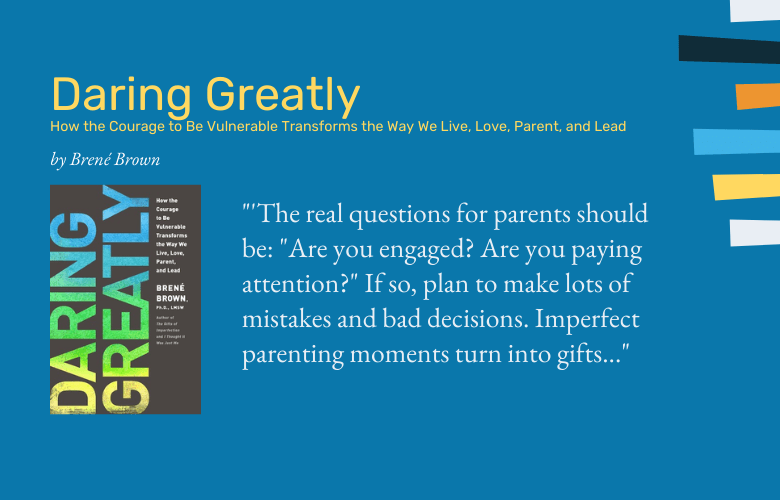 Learning, including social and emotional development, happens within the context of healthy relationships.

Connection is about being both physically and emotionally present for your children. It is through this connection that children learn to feel safe within their relationship with their parents and know their basic needs will be met.

Why is connection so important?

Connecting with our children does not come naturally for everyone. Our own experiences and upbringing influence the ways in which we naturally connect. When something hasn’t been modeled for us, it doesn’t come naturally. That doesn’t mean that we can’t do it. It just means that we have to make a commitment to it and work at it.

Coaching rather than controlling

There are a few different definitions of coaching, but when it relates to parenting, coaching means helping children learn rather than teaching them. A large part of our role as parents is supporting our children to reach their potential through supporting their social, emotional, physical, and cognitive development.

Emotion coaching is a parenting technique that helps children understand their feelings. When we act as an emotional coach for our children, they learn how emotions work and how to react to feelings in healthy ways.parent

Strong willed children can be a challenge when they’re young, but if sensitively parented, they become terrific teens and young adults. Self-motivated and inner-directed, these children go after what they want, rarely succumb to peer pressure, and become natural-born leaders.

When you enter a power struggle with your child, they are throwing things across the room, or screaming “I hate you!” – you may think “this is not working!”  You are not alone. All parents who practice positive parenting techniques have struggled with self-doubt – it is a natural parent of the parenting journey. Check out the seven reasons why it feels like positive parenting isn’t working from Parents with Confidence.

How to respond when your child tells you “no”

“No” is one of the top word toddlers hear. It is easy to say and demands a lot of attention. In fact, it is both developmentally appropriate and an expected milestone for children to assert their independence through the use of “no.” Rather than focusing from the adult perspective, (that your child is being defiant), think about what your child is really telling you. When your child tells you “no” they are simply stating that they do not want to do whatever you are telling them – which is valid. However, often we were not providing a choice. Consider validating that feeling by saying “I hear you. You do not want take a bath.” Then decide if you want to negotiate their demands or stand firm by saying “It is not a choice. It is bath time.” The use of transition warnings, reminders, and choices can limit your child’s desire to assert control and say “no.”

Compare the differences between punishment and discipline strategies to discover ways to positively influence and guide your child's behaviors.
Read More Download 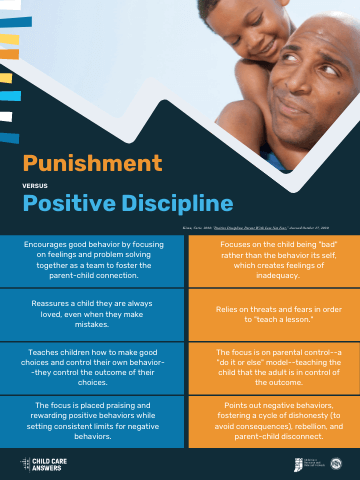 More about parenting and supporting your child's social and emotional development

A Glimpse into Fatherhood: Q & A with CCA Dads

Early care and education news to your inbox

Count on our newsletters to get you the most important early care and education news, when you need it. We send a different newsletter each month to either families, child care professionals, or communities/employers. Sign up for one or all today!

What are you looking for?